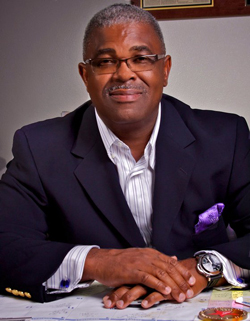 Bill served as the Chief Executive Officer for The Miami Dade Chamber of Commerce from 2005 until August of 2013. Miami Dade Chamber of Commerce is Florida’s oldest Chamber of Commerce that has as its primary mission the growth and retention of minority businesses. While Bill manages the day to day operations of his staff, he is over all aspects including financial, programming and development. The chamber has over 500 + members whom Bill advocates for on a daily basis. In this role he consulted with elected officials as well as public and privately held corporations’ executives in order to insure that the minority vendor community in Miami Dade would thrive.

He is a Board Member of The Greater Miami Convention and Visitors Bureau, The Black Hospitality Initiative, South Florida Workforce and The Children’s Trust. He serves on a national board, the Alliance for Digital Equality. Bill is a Past President and a founding member of the 100 Black Men of South Florida, Inc. Bill’s proudest civic accomplishments come from his work with the other members of the 100 Black Men in the creation of the 100’s nationally recognized Leadership Academy. The Academy is a fully engrossed mentorship program that has taken kids from failing elementary grades to college scholarship recipients as schools such as Morehouse College, Florida A&M University, and the University of Virginia. Bill also founded The Young Professionals Network of Miami. Its main goal is the mentoring, recruitment and retention of young black professionals in the South Florida area.

Bill wrote a syndicated newspaper column that appeared weekly in The Miami Herald from 2008 to 2011. He regularly speaks at various high schools, business conferences and youth conventions. The topics range from issues affecting African Americans in corporate America to topics such as the importance of mentoring and professional development among many others. He was selected as the CEO of the Year in 2008 by The South Florida Business Journal and was also listed as one of Miami’s Top Leaders by Miami Today. In 2011, he was selected by the United States Small Business Administration as the Minority Small Business Champion of the Year. In 2013, he was selected to be the commencement speaker for the graduating class of 2013 at Miami Dade College, the largest college in the U.S.

Along with being an avid golfer and jazz enthusiast, Bill is a member of Omega Psi Phi Fraternity, Inc. and a proud graduate of Clark Atlanta University in Atlanta, Georgia where he obtained a BS degree in Political Science. Bill is originally from Augusta, Georgia and is the son of Margaret and Joseph Diggs. Bill is married to Marie Diggs. He has two wonderful children — Drew and Dominique.