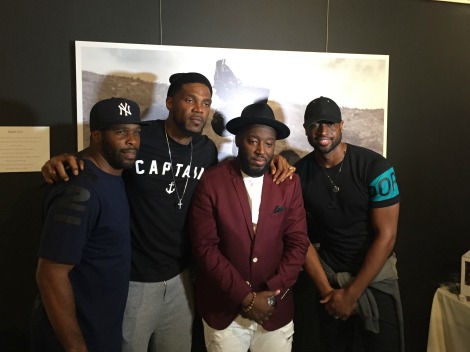 Bob Metelus, a local Haitian-American photographer, wants you to know the beautiful side of Haiti.

Metelus, who was born in Miami, celebrated his 39th birthday Thursday (9/15) by unveiling a collection of photographs from his parents’ homeland, “Haiti: A Cry from a Forgotten Paradise” at Macaya Gallery in Wynwood.

The popular Haitian konpa band KLASS also was on hand but the party was shut down by Miami police —despite organizers insisting that they had all of the required permits — before the band could play.

Metelus’ 16 mixed-media photos showcase a variety of imagery from Haiti, from the white-sand beach to fishermen in wooden boats to the pastel-colors of the mountaintop Jalousie slum in Port-au-Prince.

“People think they know what [Haiti] is. I wanted to let people know there was something different that they didn’t know about,” Metelus said. “I wanted them to see it through my eyes, from my perspective because it’s beautiful. People forget. That’s why the name of the collection is ‘Forgotten Paradise.’ “

Metelus took two trips to Haiti and shot over 1,000 photographs before choosing the ones he thought best showed the country’s hidden paradise. Among them is a photo of the statute of the Nèg Mawon, the Black Maroon, which symbolizes Haiti and freedom.

“I love what it stands for,” said Wade, who announced he was taking the piece and called on the packed room “to support Haiti and support this history.”

Wade, who left the Heat for his hometown Chicago Bulls earlier this summer, joked that he hoped the piece isn’t too expensive because “taxes in Chicago are rough.”

“These photos are amazing,” Wade told the Miami Herald. “A lot of people have a negative perception of Haiti and when I went over to Haiti, I saw the beautiful side of Haiti that a lot of people don’t talk about. I enjoyed it, me and my wife had an amazing time out there. It’s just a beautiful country.”

You can catch the exhibit at Macaya Gallery, 145 NW 36th St., where it will be up for another week, Metelus said.
SOURCE