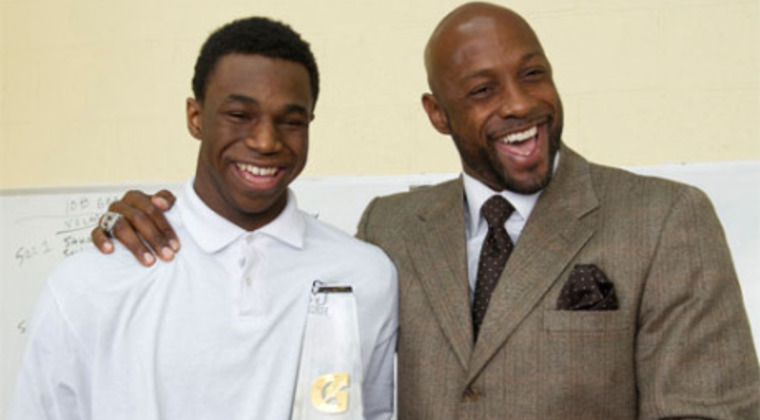 It’s the circle of life. A former Gatorade Player of the Year, Alonzo Mourning, presenting to this year’s winner, Andrew Wiggins. The award recognizes outstanding athletic excellence, as well as high standards of academic achievement and exemplary character demonstrated on and off the field. Zo won the award back in ’88, when he was an All-American at Indian River High School in Chesapeake, Virginia. Wiggins, the No. 1 ranked senior (Rivals, Scout and ESPN) from Huntington St. Joseph’s Prep, was awarded the trophy for leading his team in points, rebounds and steals, averaging 23.4 points, 11.2 rebounds and 2.4 steals per game while maintaining a 3.31 GPA in the classroom.

Kidney problems ended the former NBA champ’s career before it was time, but even now, you can’t have a serious conversation about the best centers to ever do it on the high school, collegiate and pro level without mentioning Zo. TSL caught up with the Georgetown legend to talk about the Gatorade POY award, the Hoyas and, of course, the Miami Heat.

TSL: You won the 87-88 Gatorade Player of the Year award…

AM: Don’t remind me, I’m getting old.

TSL: What was it like to win the award back then?

AM: The award didn’t have as much prestige as it does now. But when you look at the alumni that has received the award like Kobe and LeBron, you know, just the list of other individuals that received it…back then I received a plaque, now you’re receiving a huge ceramic glass and wooden trophy and everything; so there’s a lot more prestige that goes with it and everything. The award is connected with the ESPY’s as well, so a lot of theses individuals that receive the award will be invited to Los Angeles. Andrew will be invited to Los Angeles to receive the Athlete of the Year award so the prestige of the award has grown tremendously.

TSL: Now you’re helping give out the award. How does that feel?

AM: First of all I’m proud of each and every one of these young folks that receive the award, I really am. When you think about how much goes into balancing out being a great student, number one, and then being a great athlete, there’s a lot that goes into it and there’s a lot of responsibilities that come with it. This kid Andrew Wiggins has definitely balanced all of that out and I told him I was proud of him and the best is yet to come. I told him that basketball is temporary. When that ball stops bouncing, you gotta have a plan B. I told him that you’re gonna have a long career in basketball. I brought up some examples of individuals who had great high school careers and went on to the pros and had short careers. I told him the value of education and I think, more importantly, one of the reasons he received this award was not just for what he did on the court, but the content of his character and what he did off the court in the community and I think that makes all the difference in the world.

TSL: Any chance you did some recruiting for Georgetown in your conversation?

AM: Nah, this kid is pretty sharp, he knows where he wants to go, he doesn’t need my influence. If it happens, it happens you know. I’ll leave it to Georgetown to do the recruiting from that point.

TSL: You still rep the Hoyas to the fullest?

AM: I’m on the board of trustees of Georgetown, so yeah, I do.

TSL: What do you think about the Hoyas losing to FGCU? Do you think John Thompson III is the right coach moving forward?

AM: Yeah. I mean, it happens brother. Just because you lose early in the tournament, that doesn’t mean they should question your coaching ability. Not when you got great players in the NCAA tournament. Unfortunately sometimes you get stunned. You got lower seeds that on one given day will play better than the higher seed. If we played that team 10 times, we would win nine out of 10 times. So all it takes is one night. All it takes is the ball bouncing one way for that team, that’s all it took. When you look back to when Georgetown lost to Villanova, Georgetown beat up on Villanova for years and years and years. But back when they lost to Villanova in the championship game in ’85, you say to yourself, Wow, because all of the oddsmakers thought Villanova was gonna get destroyed. But they shot 70-something percent that day and they had to shoot that percentage in order to beat them by one point. They beat Georgetown by one point. I don’t think that record has been broken yet. But anybody can get beaten on any given night. It just happened, you know, so Florida Gulf Coast is a great team, competitive team. And Andy Enfield – he actually was my shooting coach way back before he was even thought of. I contracted him out and he followed me for a whole year and he worked with me when I was trying to come back from the kidney transplant, you know, so he’s an amazing coach. He’s a good teacher and it doesn’t surprise me that he has gone somewhere and turned a program around because of his coaching ability. But I don’t think people should question John Thompson III. They shouldn’t question his coaching ability. He’s a great coach as well.

TSL: Why do you think that happens?

AM: I don’t know man, because of the media. Media has brought so much now, there’s so many different media outlets. It’s an opinion, and excuse my language, opinions are like assholes everybody’s got one. So when you got all these different media outlets that are expressing their opinions, you got everybody reading these opinions and then they question the ability of these coaches. But when it comes down to it it’s all about winning. That’s what it comes down to. It’s all about winning. When you win, you get rid of doubts about you and what have you. Tiger’s a good friend of mine and Nike put out an ad that said “Winning Takes Care of Everything.” It was a great ad at the right time, but you got people that were upset about that ad. But it’s so true. Winning takes care of everything. It really does.

TSL: Speaking of winning, the Heat is on an incredible win streak (Ed note: this Q+A happened before the Heat lost to the Bulls).

AM: I’m proud of these guys. They’re working their butts off and they’re settling into their roles. They’re a world championship team. We’re going out and taking it one game at a time. LeBron put it best, he said we’re not looking at the record, we’re focused on one game at a time. If it happens, then it was meant to be. We go out with the same game plan every night to compete at a high level and everybody does their job. And when that happens, nine times out of 10, we’re successful and everybody comes with that approach.

TSL: You’re one of the architects of the Miami Heat. What’s it like to see this? What’s it like for the Heat to be the most popular team in the League?

AM: It feels good. I mean, I tell you, Tim Hardaway and myself, Dan Majerle, you know, all the players in the past – PJ Brown, Jamal Mashburn – we were the pioneers of building this program and building this organization. So, back then, we planted the seed. A lot of people remember the wars between the Knicks and the Heat. Now, with the new generation, with us drafting Dwyane Wade and now two other individuals that compliment D. Wade’s game in Chris and LeBron, I mean, we’re slowly making history now. I’m happy to still be a part of the organization and still be a part of the process.

TSL:You were a sharp dresser when you played in the League. What do you think about the players’ fashion these days?

AM: You know what? Everybody has their own style. I mean, I’m strictly business, suits and ties, you name it, I’m strictly business. But I look at these young guys now and I say to myself, Wow, my how fashion has changed (laughs) and there’s not too much more I can say about that. It’s pretty amazing how it’s changed, you know, to each his own. Everybody’s into their own thing, the glasses with no lenses, the loud colors and what have you. I’m too big to be wearing loud colors. Skinny jeans? I can’t see myself in those. I don’t like anything tight on my body. The only thing tight I like on my body is my wristwatch.

AM: You know I’m a little biased to tell you the truth, but we have two amazing guys on our team that are amazing defenders. We have Shane Battier and LeBron James and you have to throw D. Wade in there, too. These guys are amazing defenders. It’s a tough game man, the way they are calling the game now. You can’t touch anybody, anymore. From a perimeter standpoint, you really have to be committed. Now that Bruce Bowen has kind of left the game, I think about LeBron. I think he deserves Defensive Player of the Year. I really do. Because I think he’s been slighted for a couple years. I won it twice, but I think this year LeBron deserves to win it.

TSL: What do you think your chances are for the Hall of Fame?

AM: You know what? There’s a committee that decides that, man. If I’m not in it, I’m not going to lose any sleep over it. The Hall of Fame is a very prestigious award and it’s the pinnacle of our sport. I think every athlete, when they come into the league, they want to win a championship and they want to be in the Hall of Fame. It would be a great honor. If it happens, it happens; if it doesn’t, I’ll continue to live my life.